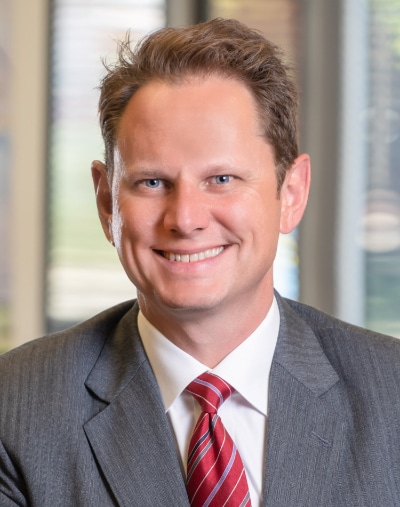 Attorney Samuel Wendt is a Kansas City personal injury attorney and founding member of Wendt Law Firm P.C. and has dedicated his practice to representing injured people and their families.

Attorney Samuel (Sam) M. Wendt is the founder of Wendt Law Firm, P.C. and has dedicated his practice to representing injured people and their families. Mr. Wendt has successfully represented countless people involved in automobile and commercial vehicle accidents, victims of medical malpractice and nursing home neglect, sexual abuse survivors, and wrongful death claims. He has also represented hundreds of clients injured by defective pharmaceuticals and medical devices, such as Avandia, Actos, and Yaz/Yasmin, to name a few.

Mr. Wendt maintains a peer review rating of “AV Preeminent” by Martindale-Hubbell, the highest available rating. He was the youngest attorney named by the Kansas City Business Journal as “Best of the Bar” in 2008 and has been included since that date. Mr. Wendt also has been selected as one of Kansas and Missouri’s “Super Lawyers” by Thomson Reuters every year since 2008 and recognized by the publication as one of the Top 50 attorneys in Kansas City and Top 100 attorneys in the States of Missouri and Kansas. In 2010, Mr. Wendt was acknowledged by Missouri Lawyers Weekly as an “Up & Coming” attorney in Missouri, and in 2011, he was selected by the National Trial Lawyers Association as one of Missouri’s Top 100 trial attorneys and “Top 40 Under 40.” In 2013, Mr. Wendt was included in the Multi-Million Dollar Advocates Forum, one of the most prestigious groups of trial lawyers in the United States where membership is reserved for those who have won multi-million dollar verdicts or settlements. In 2014, the Kansas City Metropolitan Bar Association awarded Mr. Wendt the Thomas J. Conway Award, which honors a young trial lawyer who exemplifies outstanding trial skills and the ability to be a fierce advocate, while simultaneously a good friend to opposing counsel. In 2015, Mr. Wendt won the Missouri Lawyers Award for one of the largest reported settlements of that year. In 2020, he and the firm were named as one of U.S. News & World Report’s “Best Lawyers” and “Best Law Firms” in the region, a recognition based entirely on peer review and consensus opinion of leading lawyers.

Mr. Wendt is a member, in good standing, of the Kansas, Missouri, and Illinois state courts. He is also a member of the following United States District Courts: District of Kansas, Western and Eastern Districts of Missouri, and Northern, Central, and Southern Districts of Illinois. Mr. Wendt is actively involved in several charitable and professional organizations, including the Missouri Bar, American Association for Justice, Missouri Association of Trial Attorneys, Kansas City Metropolitan Bar Association, National Trial Lawyers Association, Midwest Innocence Project, and Brain Injury Association of Missouri, Inc. In 2020, he was elected President of the Kansas City Metropolitan Bar Association, an organization consisting of approximately 5,000 attorneys throughout the Kansas City area. Mr. Wendt also sits on the Missouri Association of Trial Attorneys’ Board of Governors and the Midwest Innocence Project’s Board of Directors.

Mr. Wendt has published numerous articles and chapters and made dozens of presentations concerning his area of practice to companies and organizations, including the Missouri Bar; Kansas City Metropolitan Bar Association; Forum on the Construction Industry, American Bar Association; National Business Institute; and Missouri Association of Trial Attorneys.

Mr. Wendt received a Bachelor of Science degree in Cellular Biology from the University of Kansas and his Juris Doctor degree from Washburn University School of Law. His background has proved quite valuable in handling complex litigation. Throughout his career, Mr. Wendt has maintained close contact with his clients, and their families, to ensure that their legal needs are fully met. Since serious injuries can often alter people’s entire lives, Mr. Wendt works tirelessly to help his clients receive fair compensation for what’s been lost.